Whatever they are doing at the Barlett School of Architecture UCL they seem to be doing an amazing job at pushing their students to extraordinary limits.   Sara Shafiei ‘Theater for Magicians’ is an extremely imaginative and rich proposal.  Playing on the notions of illusions created by magicians and the actual illusions portrayed through vantage points.

The project attempts to portray how magic and illusion can become an inherent part of the architectural design, which foregrounds the engagement of the user in the building.

The proposal begins by exploring how Harry Houdini’s ‘Vanishing Elephant’ trick is manifested within Albrecht Dürer’s ‘cone of light and vision’ to merge showmanship, optics and illusion.The resultant building, a Theatre for Magicians, is located in the National Botanical Gardens in Rome.

The building is situated at the peak of the site with picturesque views overlooking the site. The structure of the building is rooted in excess baroque ornamentation. The laser cutter is harnessed to create the detailed pattering on the facade of the building, allowing light to filter through the skin, creating a ‘glowing’ theater in the hills, enticing visitors inside. 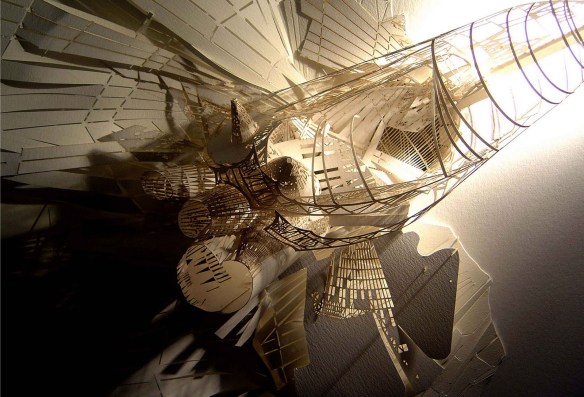 Anamorphosis can be seen to use perspective constructions to create a “trick”. The viewer is presented with something that does not make sense when viewed conventionally, and so they must seek out the unconventional viewpoint in order to resolve the “trick”. Therefore, anamorphosis becomes a secret, in which the search and discovery of images became an act of magic.

In order to unravel an anamorphic image, the subject’s relationship to the object of vision much be altered. As Dan Collins suggests in Anamorphosis and the Eccentric Observer, ‘For the viewer to observe anamorphic image they must become an “eccentric observer,” an observer who is willing to sacrifice a centric vantage point for the possibility of catching the uncanny’.

From a traditional point of view, sculpture and architecture ‘implicitly endorse an observer willing to link conventional profiles of an object into a flawless and harmonious progression.’ There are very few designs, which break away from this mould. Borromini’s Colonnade in the Palazzo Spada in Rome, and Palladio’s Teatro Olimpico in Vicenza represent the inverse of the norm, as their architecture insists on establishing a hierarchy of views that favor a specific vantage point. This form of design allows the viewer to become part of the process of creating an image, therefore becoming an inherent part of the final product. It is for the possibility of this outcome, that anamorphosis is used as a tool of illusion in the architectural proposal.

Here, anamorphosis is used on the façade of the theatre. The façade holds the distorted anamorphic image, and the cone (which intersects the façade) becomes the plane, which reveals the true image. As there are no traditional signs around the site to navigate visitors, visitors must explore the landscape and architecture before them to unravel its secrets. The anamorphic cone within the façade reflects the words BOX OFFICE, when the cone is viewed from the correct vantage point. In this case the “secret perspective” is positioned at the top of the grand stone staircase.

All text and images via http://www.saraben-studio.com/p/selected-work.html

4 thoughts on “Theater For Magicians – Sara Shafiei – The Bartlett UCL”